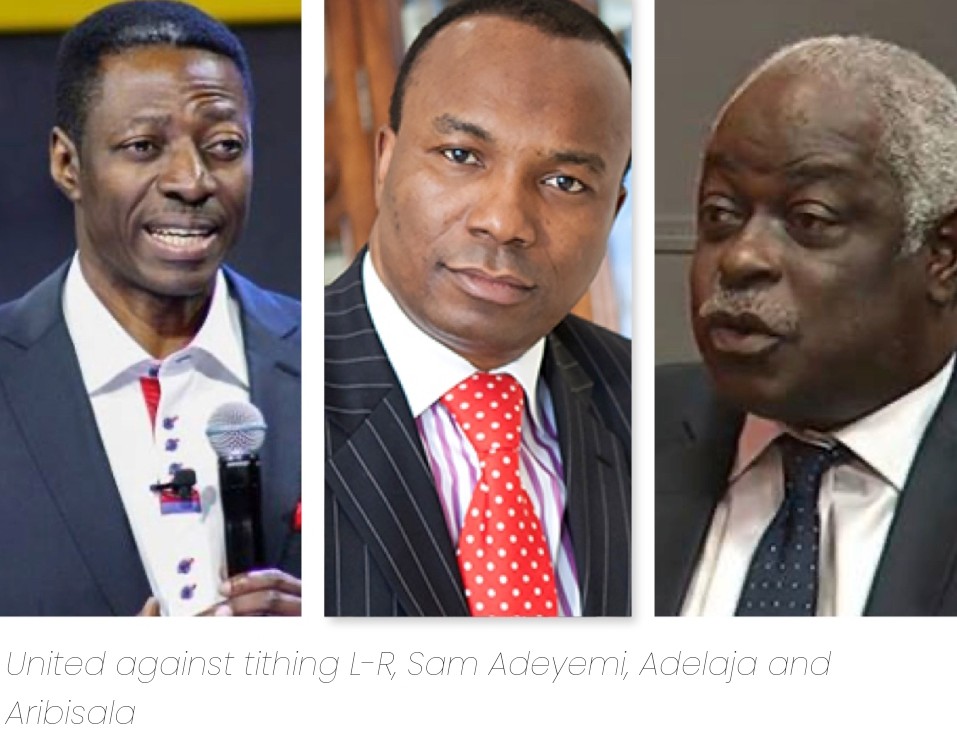 Like Creflo Dollar, the American preacher, several Nigerian pastors also do not believe or preach tithing, unlike other Pentecostals who make tithing one of their cardinal doctrines.

One of them is Pastor Sam Adeyemi, founder and president of Daystar Christian Center. His position is that God did not tell anybody to pay tithe.

If you are paying it, it is because you chose to do it, it is not compulsory, he said.

On Sunday, 25 February 2022, he told his congregation: “People should not give out of fear.” As reported by Church Times, Adeyemi said he personally took interest in the tithe debate, did a lot of studies and concluded that God is not angry with anybody that does not pay tithe nor is the person under any form of curse.

“I have been following the tithe debate. I discovered that it has been an age-long debate and it will be on for a long time.

“My first observation is that church people are behaving as if we own the word tithe. We don’t own the word. It is an English word. I want to say clearly that tithe, as practised under the law of Moses, has expired. The death and resurrection of Jesus have put paid to it. It has expired.”

“All the requirements of the law were satisfied under Christ” adding however that “It is a gamble to say Jesus never paid tithe. The fact that it was not written that Jesus paid tithe does not mean he did not do it. I can also claim that Jesus did not go to the toilet because it is not written. Eighteen years of his life were not recorded in the Bible. When he was born his parents satisfied the requirements of the law. John 21v25 says there are many things he did that were not recorded. Jesus did not say it was wrong to pay tithe in his day.”

Adeyemi noted further: “The law of the spirit of life in Christ has made us free. Romans 8 tells us that we are free. No Christian should feel guilty for not paying tithe. There is nothing you can add to what Jesus did to be qualified before God. When Jesus said it is finished it was finished. Gal 3v13 says Christ has redeemed us from the curse of the law. A Christian is not cursed because he or she did not pay tithe. A Christian should not give out of fear. A Christian should give out of love. We are free from guilt, from fear. We are in a dispensation of grace.”

Another preacher who is in the same boat with Dollar is Nigerian born Pastor Sunday Adelaja, founder and president of The Embassy of the Blessed Kingdom of for all Nations with his headquarters in Ukraine. He said he does not collect Tithe from his member because it is not Biblical. He argued, “Matthew 23v23 is not addressed to the followers of Jesus. He was talking to the Pharisee. And he was not asking them to pay money tithe. He was saying they pay tithe of mint, dill and cumin, not money tithe.

“There is no place in the scripture where money is paid as tithe. The only place where money is allowed is in Deut. 14v22-28 where the Lord says the people can exchange their tithe for money in case the products they are carrying are too heavy for them and that they should eventually use the money to buy what they like and eat. That is the only place where tithe is mentioned in connection to money.”

Adelaja explained, “I don’t believe tithing is commanded in the New Testament. We are under no obligation to pay tithe. Nobody should force you to pay tithe. But on your own, you pay out of love.”

There is also Pastor Femi Aribisala, the fellowship coordinator of Healing Wings, a pentecostal Christian fellowship. An article published in Daily Post, entitled “Every Pastor who collects tithes is a thief, argued:

"As far as many pastors are concerned, the most important scripture of all is not to be found in the word of Jesus. Neither is it even in the New Testament. That scripture says: “‘Bring all the tithes into the storehouse, that there may be food in my house, and try me now in this,’ says the LORD of hosts, ‘If I will not open for you the windows of heaven and pour out for you such blessing that there will not be room enough to receive it.’” (Malachi 3:10).

This scripture is drummed repeatedly into Christians on Sundays. However, the only time Jesus mentioned tithing in scripture, he pointed out that it was not a weighty matter of the law. (Matthew 23:23). Hebrews says people only receive tithes “according to the law.” (Hebrews 7:5). It then insists tithing (and everything else under the law) has been annulled: “The former regulation is set aside because it was weak and useless.” (Hebrews 7:18-19). Nevertheless, mercenary pastors continue to insist on the payment of tithes.

“Jesus rebuked the Pharisees for keeping part instead of the whole law. (Matthew 23:23). That is what tithe-collecting pastors do today.

“If we insist our congregants must pay tithes, we must also insist that they keep the rest of the law. James says: “Whoever shall keep the whole law, and yet stumble in one point, he is guilty of all.” (James 2:10). Therefore, if we insist on tithing, we should also refrain from eating pork. We should stone adulterers, execute homosexuals, kill Sabbath violators and restore blood sacrifices”, Aribisala wrote.

Dollars caused a stir this week when he admitted that he had all the while been preaching heresy about tithes. His new position now is that the concept belonged to the Old Testament, not the New Dispensation.

In one of his Sunday ministrations, titled, “The Great Misunderstanding” he cited Romans 6: 14 to argue that Christians now live under grace and not the laws of the Old Testament.

Romans 6: 14: “For sin shall not have dominion over you; for ye are not under the law, but under the grace” You are under grace not under laws, he noted.

Tithe-collecting pastors counter this by maintaining the payment of tithes pre-dated by the law.

Abraham is cited as the cardinal example of someone who paid tithes before the promulgation of the Law of Moses, as did Jacob, his grandson. However, such arguments are disingenuous.

Before the law, tithing was at best an example but not a commandment. Moreover, pastors fail to mention that Abraham only tithed once in his lifetime. When he did, he did not even tithe his own money: he tithed the spoils of war. He gave ten per cent of the plunder he took when he rescued Lot to Melchisedec, king of Salem. But then he did not even keep the rest but returned it (all ninety per cent) to the king of Sodom.”

They all echo the position of Daddy Freeze, a social critic who, in a past post on Instagram, argued: “Tithing is a sinful practice that carries a curse for Christians. There is no scriptural record of Non-Jewish Christians paying tithes”.