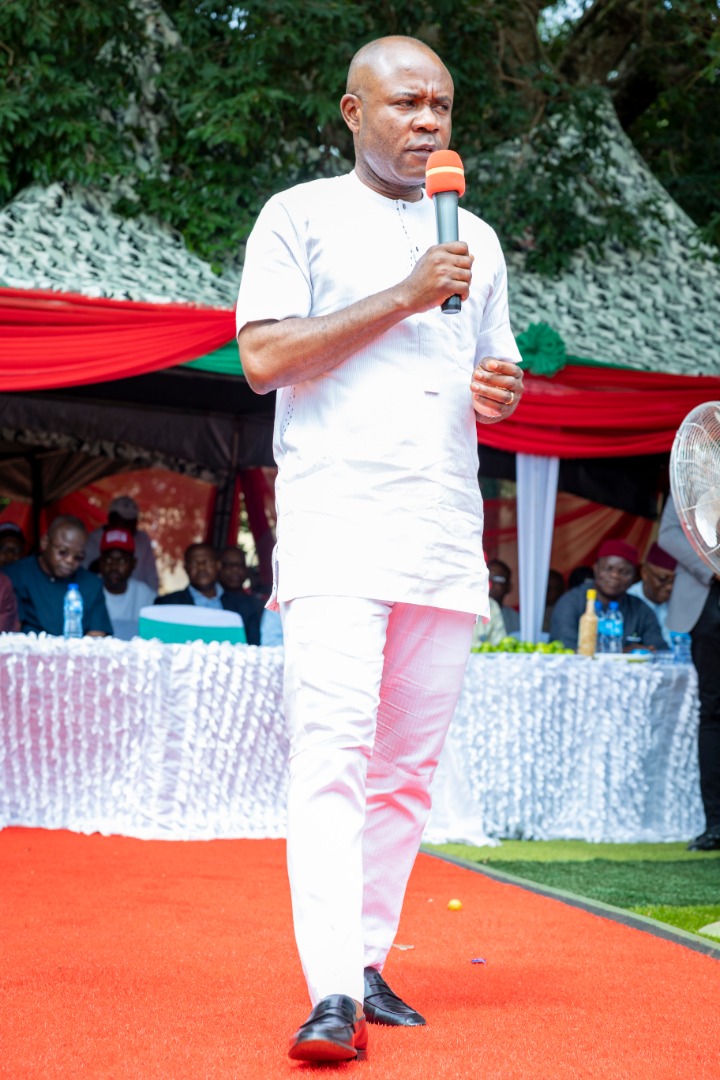 The Enugu State Peoples Democratic Party, PDP, governorship candidate ahead of next year’s general elections, Barr. Peter Mbah has stated that Enugu State is the most peaceful, safest and secure place to live and do business in Nigeria.

The petroleum downstream entrepreneur said this at Ogrute, Enugu-Ezike, the Igboeze North local government headquarters on Wednesday during his thank you visit to the people of the area for supporting his candidature in the recently concluded governorship primary election held on the 25th May, 2022.

Commending the state government under the leadership of Governor Ifeanyi Ugwuanyi for ensuring security and welfare of the people in the state, Mbah reiterated his resolve to sustain his good works, build on the existing infrastructure and exponentially grow the GDP to insulate the state from the vagaries of a volatile national economy.

According to him, Governor Ugwuanyi has ensured the maintenance of peace and security even when there’s a prevailing state of insecurity in the country, adding that the PDP in the state has brought development and massive infrastructure distributed across the state.

“We have peace in our state amid insecurity in the country. Enugu State today is arguably one of the most peaceful and safest states to live in Nigeria. What we are witnessing today in Igboeze North local government shows a wide acceptance of our great party, PDP, among the people. Igboeze North is taking ownership of what belongs to them,” he said.

While extending his gratitude to the people of the area for their votes during the primary election in May, the gubernatorial candidate informed them they had not made a mistake by voting for him stating, “we came here to say thank you for your support and solidarity. We came here to tell you you’re master sailors who held to faith during the rage. We came not to campaign but to say thank you,” he added.

Mbah, observing the impressive state of infrastructure in the state, said such feats were made possible by Governor Ugwuanyi because of his prudent, creative and pragmatic management of the available resources, adding that the event of 25th May was an endorsement of the party that it has done well.

Mbah went further to describe the troubles threatening the country as hydra-headed which required urgent attention to tackle. “Our country is facing ominous challenges, and from what we have been reading from the media, Nigeria is broke. Our debt service is higher than our revenue generation.

“This demands someone with the solution to the impending and looming economic crisis. This shows we must look inwards. Enugu is blessed with human, material, mineral and natural resources. You’ve elected a selfless-committed person who can harness these and do things differently in the state.

“We have our clear strategy and programmes for all the sectors and we are bringing in disruptive innovation to insulate the State from economic strangulation. Because of your decision, Enugu will be a great state,” he said.

Earlier in his welcome address, the chairman of the council area, Hon. Ejike Itodo stressed that Igboeze North local government has always been a PDP area, adding that the local government would emerge among the top in terms of votes for the party.

“Igboeze North is PDP and PDP is Igboeze North. 2023 will give us another opportunity to prove ourselves and we will give you maximum votes. PDP has done well for Igboeze North, that’s why we are all members of the party,” Itodo maintained.