G.O.C AT 60: THE BEGINNING OF SERVICE TO HUMANITY AND GOD 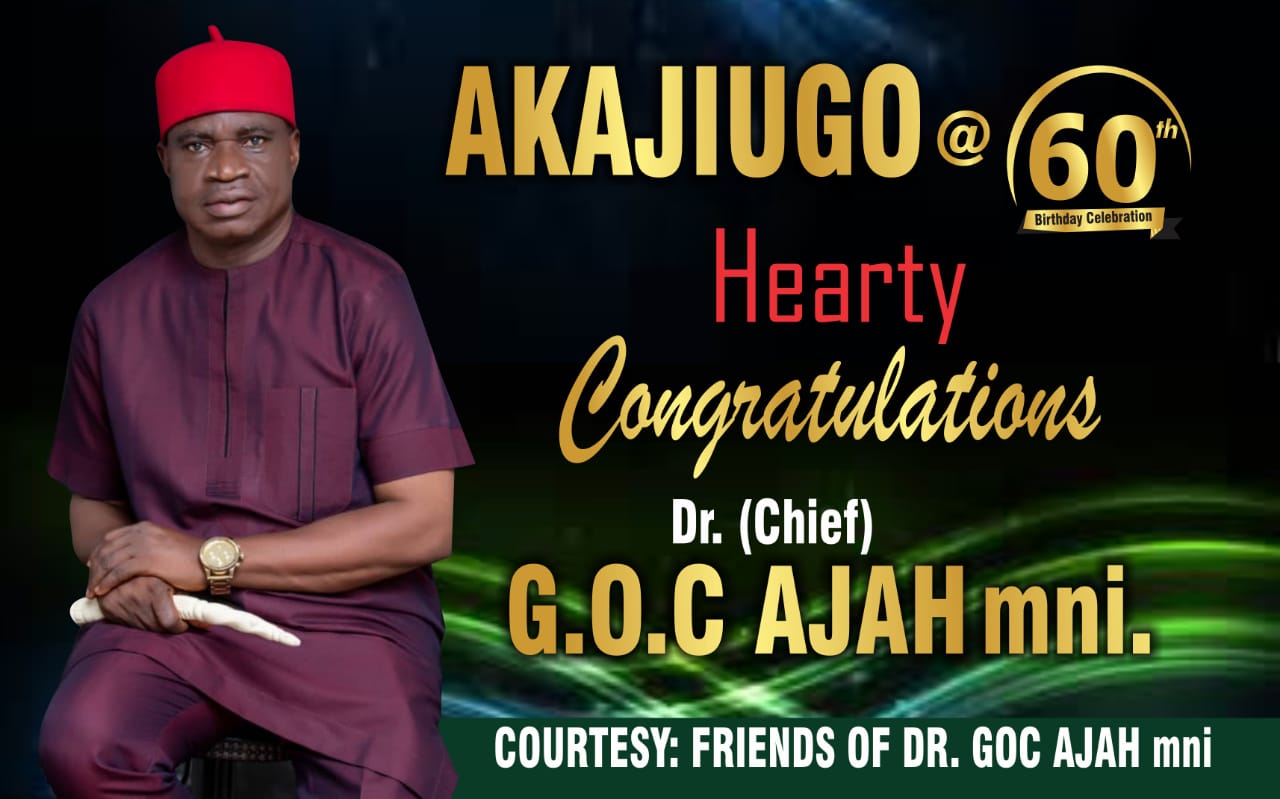 In his autobiography, My Odyssey, Dr. Nnamdi Azikiwe recalls his first meeting with Dr. Kwegyir Aggrey of the Gold Coast and the impact that meeting was to have on him and Africa in the later years. According to Azikiwe, Aggrey’s sermon during that encounter was not only symbolic and suave, but it was also one which found his heart a ready soil for the dreams of a new social order in Africa in the 20th century and beyond. In the years after that memorable meeting with Aggrey, Azikiwe was to inaugurate his “Argonauts” consisting of Nigerians who sailed across the Atlantic ocean to acquire the proverbial golden fleece in the United States of America.

The return of the “Argonauts” to Nigeria in the 1940s was probably a game changer in the course and contents of the nationalist movement on the continent of Africa – and what with their intellectual contributions to this end? The incise pen of Akweke Abyssinia Nwafor-Orizu, as made manifest in his epic, Without Bitterness: Western Nations in Post-War Africa (Creative Age, 1944) made and impressionable impact on the quest for Nigeria’s independence. For instance, the book was known to have led to the formation of the Zikist Movement, a youth vanguard of the National Council of Nigeria and the Cameroons (NCNC). Formed in 1946, the movement’s demand for the immediate restoration of Nigeria’s independence was known to have shaken the foundation of colonial rule in Nigeria.

Also, the return of the “Argonauts” was to further give a credence to Aggrey’s prophecy and charge to Azikiwe to the effect that unless there was a reorientation of values in Africa, the continent was certainly doomed. Dr. Aggrey had in conclusion of his message to Azikiwe underlined the following immortal words: “If I, one of you, could go to the new world [USA], and make a man of myself, then you can too. May God help you, Amen.”

The likes of Dr. Gabriel Ogbuife Chukwubuike Ajah (mni) may have undeniably been inspired by the thoughts and actions of great philosophers, nationalists and leaders of all ages – some of them western philosophers; others African thinkers such as the names mentioned in the foregoing paragraph. To Dr. Ajah, who until very recently, was the chairman, Enugu State Science, Technical and Vocational Schools Management Board, his philosophy about man and life is captured in “service to the society”.

Born sixty years ago (precisely on 24th July, 1962) in a sleepy Umuika village of Enuogu Nkerefi, Nkanu East Local Government Area of Enugu State, Ajah had his primary education in Enuogu, Nkerefi, between 1970 and 1973; secondary education at the Colliery Comprehensive Secondary School, Ngwo (1974-1979); University of Benin, Benin City, where he studied English and Literary Studies for his Bachelors degree in English Education (1984-1986); and M.A. in English as a second language (1987-1990).

Also, between 1995 and 2002, Dr. Ajah was at the University of Nigeria (Enugu Campus) for his Bachelor of Law (LL.B) programme; in 2016 he earned a Ph.D in Education Management from the Enugu State University of Science and Technology. Earlier in 2002, Dr. Ajah had attended the National Institute for Policy and Strategic Studies, Kuru, near Jos, for a Senior Executive Course No. 24.

But what is the use of knowledge if not for service, especially in a knowledge-driven society like ours where Aristotle’s transcendental concept of the unmoved mover is greatly in dire need to be able to bridge the yawning gaps in human relations. We thus can evaluate Dr. Ajah’s numerous educational trainings in the light of his work experiences and contributions to the society, which include (but not invited) to the following:

Outside government circles where, as we have recounted in the foregoing paragraphs, Dr. Ajah is known to have acquitted himself greatly, empirical evidence appears to show that he has established unbroken records in community and philanthropic services. In the sub-sector of the society, Dr. Ajah is known to have singlehanded founded the Girls Comprehensive Secondary School, Enuogu, Nkerefi. Now known as the Science Technical College, Enuogu, the school which began in 2004, has, during the past eighteen years, trained young minds for university education and technical expertise in the business world.

Reliving his days as, what some commentators wound prefer to describe as “super-permanent secretary”, Permanent Secretary and acting Chairman, Enugu State University Basic Education Board (ENSUBEB), Dr. Ajah, who enjoys the title of the “Ambassador of the Kingdom” conferred on him in 2019 by the General Council, Assemblies of God Nigeria, quipped: “I usually thank God for every opportunity in life, especially the opportunity to have served my state (Enugu) and my community (Nkerefi) in various capacities”.

One area, among many, individuals, groups and public corporations (including government agencies) in modern African societies seem to have failed the people is in building the bond of confidence and social contract, as the French philosopher, Jean Jacques Rousseau, would advocate. The spirit of social contract presupposes that individual members of the society have agreed to surrender their natural liberty to one another, and by extension have fused individual wills into a combined general will which now becomes that of the sovereign, a true sovereign power. At this point, the sovereign power should in turn be expected to provide the basics of life to these individuals (the citizens) who have surrendered their liberty and will to him/her. The basics of life expected to be supplied to the citizens by the sovereign may include protection of lives and property; provision of social amenities like pipe-borne water, electricity, road network, education, among others. It is probably because government agencies in Nigeria have abdicated their duties that made the likes of Dr. Ajah to undertake to create job opportunities and secure employments for employable individuals of the various Nigerian communities when occasions demanded.

A lawyer, educationist, management consultant and administrator, Dr. Gabriel Ajah appreciates the worth of skilled manpower training for societal growth and development, hence the demonstration of his benevolence in securing admissions into institutions of higher education, for potential leaders of tomorrow. Investigation shows that this is one of his areas of strength. According to him: “I always feel fulfilled each time God uses me to facilitate admission into the university, polytechnic or college of education for students X, Y or Z. This is because the challenge of tomorrow’s leadership belongs to them, and they must, therefore, be sufficiently equipped today for that challenge.”

In thinking and writing about Dr. Gabriel Ogbuife Chukwubuikem Ajah and his contributions to the growth of human society, one factor that has remained constant is his family, comprising the wife and the children. The wife, Mrs. Anthonia U. Ajah (Nee Offiah), leading the children, has always stood supportive of Ajah’s modest achievements. In other words, as Mark Douglas would posit: “When a man has done his best, has given his all and in the process supplied the needs of his family and his society, that man has succeeded.” “Such a man,” in the words of Bishop Paul C. Nwachukwu, “is both a public and private success.” These would have perhaps been the lot of Dr. G. O. C. Ajah during the past sixty years, even as he re-dedicates his life for more quality services to man and God in the years ahead.

One another factor that goes for Dr. Gabriel Ajah is that even though he had a humble beginning, his sense of optimism has always made him to assert that if Aggrey, Azikiwe, Nwafor-Orizu, among others, could succeed the way they did, he possesses a much brighter chance to be a success, and subsequently make others succeed, too.

Chukwu is a professor of History at Nnamdi Azikiwe University, Awka, Nigeria.