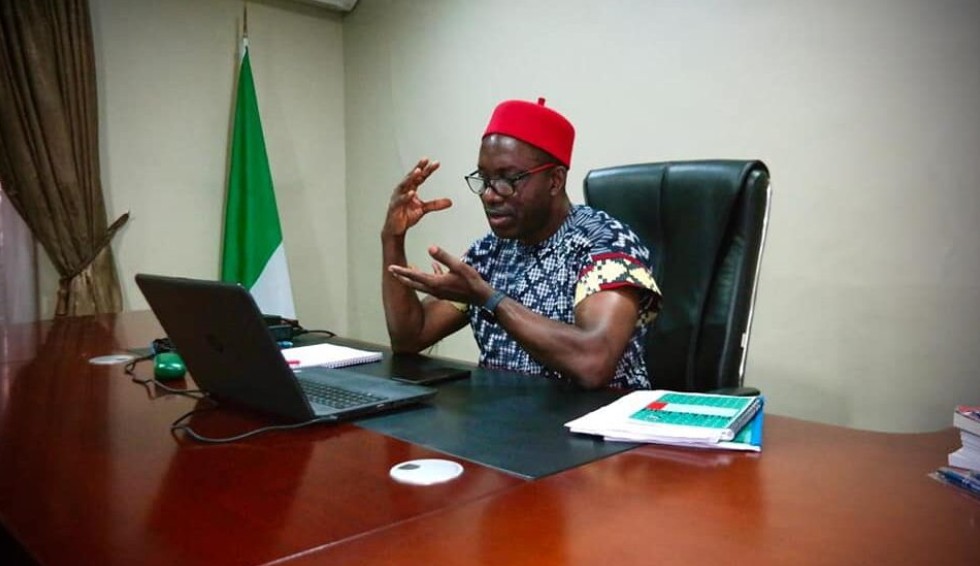 ...insists owners of illegal structures will be made to pay the cost of the demolition.

Governor Charles Soludo of Anambra State has slammed a popular prophet in the state, Chukwuemeka Ohanaemere, otherwise known as Odumeje, saying he attempted to stop the demolition of his church building.

Mr Soludo stated this on Friday at the governor’s lodge, Awka, while briefing journalists on the on-going demolition of illegal structures in the state.

The cleric’s church building which was partially pulled down on Thursday was among the illegal structures marked for demolition by the state government in Onitsha North council area of the state.

During the exercise, some tax force members, supervising the demolition were captured in a video clip manhandling the cleric.

But during the Friday briefing, which was broadcast live on Facebook, the governor said the cleric’s attempt to stop the demolition prompted the security agencies to intervene “to maintain law and order.”

The governor’s statement came hours after he condemned the manhandling of the cleric by members of the tax force.

“I received an account that he (Odumeje) drove into the place in a very menacing manner, almost rammed into the security officers and he came out and went to accost the guy who was driving the machine (excavator) with intent to stop him from going on (with the demolition),” Mr Soludo said.

He said although the cleric was entitled to be treated with “fairness and in humane manner” like every other resident, his administration would resist attempts by anybody to “challenge the state government’s authority and resolve” to maintain law and order in the state.

Mr Soludo said he personally phoned the cleric as soon as he got the details of what transpired during the demolition exercise to hear the cleric’s side of the story in order “to make a balanced and fair judgment” about the incident.

He said the owners of the affected buildings and structures were “sufficiently notified” of the demolition about two months ago, but failed to remove the marked structures, believing that the state government would condone impunity.

“I am sure God in his infinite wisdom will be very offended by anybody claiming that he built a church to worship God whereas you use that church to create a circumstance that is killing people and destroying the properties of others,” he stated.

The governor also said the state government would not compensate owners of the demolished illegal structures.

He said they would instead be asked to pay the government for the cost of demolition since they failed to remove their illegal structures themselves as earlier instructed.

“We had asked the people who built on these (drainage) channels to remove them by themselves. Now, they have failed,” he said.

“This demolition is costing us money. It will cost money to take away the debris. By the time we finish, we will put down the cost and send them the bill. They really have to pay for the cost of the demolition,” Mr Soludo added.

“They should be apologising to Ndi Anambra and then pay compensation for the people that their actions have led to their deaths,” the governor said.